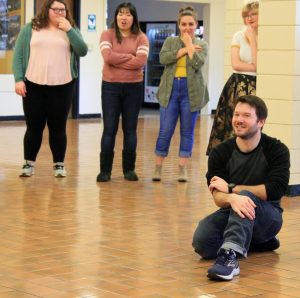 In March, James “Joey” Caverly came to visit Kent State University at Trumbull. He provided a free workshop on improvisational theatre, and visited several local high schools.  He also met with members of Deaf Theatre of Ohio to discuss the production of a Deaf theatre play (performed in ASL and spoken English), and he will be returning in August to direct a show at Kent Trumbull Theatre. The play is being scripted by members of Deaf Theatre of Ohio, with Mr. Caverly’s help.  It is a variation of Beauty and the Beast, firmly centered in a Deaf world that explores the meanings of “beast” and “beauty” in terms of disabilities and sign language.

Mr. Caverly returned in August to serve as a resident Guest Artist at Kent State University at Trumbull.  During his stay, he continued to work with members of DToO, to revise and polish the script, See No Beast, Hear No Beast, Speak No Beast. The show was performed in October, 2019.The cast and crew for the production of See No Beast, Hear No Beast, Speak No Beast was large and included a large percentage of Deaf actors. Telling the story of how sign languages were banned from education all over much of the world for nearly a century; the the philosphical battle over speech/lip-reading vs. sign language, featuring two prominent men of the debate (Alexander Graham Bell and Edward Minor Gallaudet)–all wrapped up into a fairytale loosely based upon Beauty and the Beast. The play included animation (projected at the back of the stage and above the stage), pantomimed scenes, as well as dance and sign-mimes. In the spirit of demonstrating the struggles of communication between deaf and hearing, some scenes were only signed and other scenes were only spoken, but all the words (signed and spoken) of the entire play was captioned (projected above the actors). In creating this production, Caverly strove for professionalism in everything he did, and everyone was motivated to work very hard to make the production a success. Because of this motivation, in the process of this hard work, everyone came to appreciate the communication struggles demonstrated in the play, as well as how to overcome them. This message came through clearly for the audience, as well.

The costs for this visit and production were supported generously by Kent State University Trumbull and Regional Campuses, Community Foundation of the Mahoning Valley.

Deaf Theatre of Ohio (DToO) was founded in the Spring of 2018, not long after the successful production of Kent Trumbull Theatre’s third ASL/English play, ANOTHER Christmas Carol.  The mission of this organization is to empower deaf people through theatrical productions in which the primary language of performance is American Sign Language, with English voice-over performed for the signing-impaired.  DToO is working collaboratively with Kent Trumbull Theatre to produce Beauty and the Beast in a Deaf World, which will be performed in December, 2018.

ANOTHER Christmas Carol, co-produced by Kent State University at Trumbull‘s Dr. Carol Robinson (English) and Prof. Eric Kildow (Director of Kent Trumbull Theatre). This play is loosely based upon the Charles Dickens’ classic, A Christmas Carol. In fact, many of the characters’ names were changed, to note just how loose this adaptation truly is.  The play was ensemble derived: Carol Robinson composed a draft script, which was significantly developed to completion by the cast.  Dr. Carol Robinson was the Director; Prof. Farah Kish-Leland was the Assistant Director and Sign Master;  Prof. Lauren Albaugh was the Assistant Sign Master. 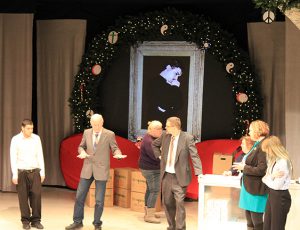 A carol is a religious folk song or popular hymn, particularly one associated with Christmas; to go caroling is to go singing, particularly Christmas songs. Some songs are beautiful, while others are deeply disturbing, and still others are simple silly fun. This production featured four “gesture-songs” that were created and performed by signing members of the cast, with original music created by hearing members of the cast.

A Christmas Carol, is not at all the first Christmas ghost story. For example, another great class is the medieval Sir Gawain and the Green Knight. Charles Dickens wrote a wonderful ghost story full of Victorian Christian ethos and humanism. This play, however, is ANOTHER ghost story, ANOTHER Christmas Carol, set in 21st-century United States (Northeast Ohio, even), attempting embrace an ethos that recognizes diversity, equity, and inclusion. It attempts to embrace, for example, the Articles of The Universal Declaration of Human Rights, as developed by founding members of the United Nations.  While Christmas is a Christian holiday that was created in the Middle Ages, it was a feast intended to replace celebrations associated with the Winter Solstice. It’s a party! Wealthier medieval Christian kings gave out gifts (as they did at most big feasts of the year). The Christmas tree and many other contemporary symbols of Christmas are are taken from older, non-Christian religious systems. 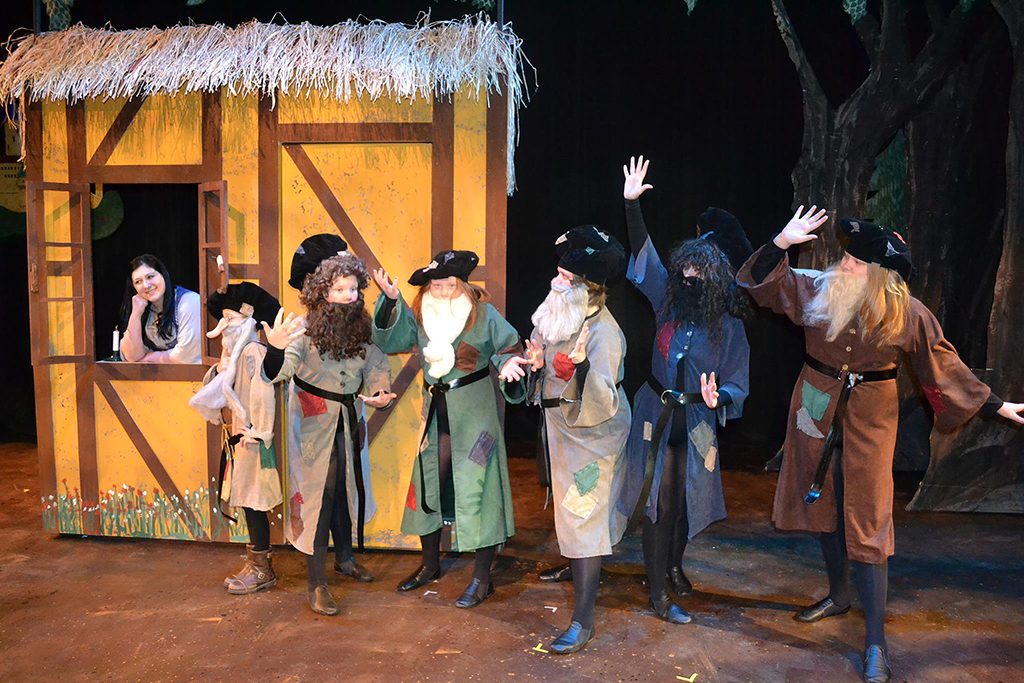 In 2013,Kent Trumbull Theatre received financial support to stage a special production of Snow White and the Seven Dwarves (a.k.a. Deaf Snow White), written by Iosif Schneiderman, Aaron Weir, and William Morgan. The play is an experimental theatre piece that blends gesture, pantomime, American Sign Language, and spoken English to retell the classic fairy tale from a Deaf culture perspective. Schneiderman worked with a group of actors and designers from both the campus and the surrounding community. In addition to the regularly scheduled rehearsals, Schneiderman also offered two workshops on the art of visual communication, open and free of cost to both the cast and the general community (except for those requesting special certification).

Schneiderman adapted Snow White (with William Morgan and Aaron Weir) so that the story is seen from a Deaf perspective. Snow White, for example, is Deaf in the play, and she finds her counterpart in the Prince who awakens her from her sleep. Through directing the play, Schneiderman shared his expertise in the theatre of gesture and mime with local performers, thus giving them an exceptional opportunity to improve their skills in physical-visual communication. Moreover, the entire production gave audiences the chance to reflect on issues related to identity and deafness. 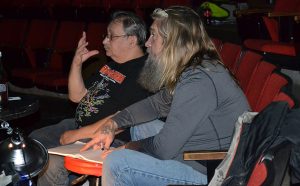 Iosif Schneiderman has a lifetime of professional experience in working in Deaf theatre. Having won first prize in Moscow’s Festival of Mime, he was invited to join Moscow’s Theatre of Expression and Gesture, where he performed for twenty-eight years. In 1973, Schneiderman was recognized for his performance at the World Festival of Mime in Czechoslovakia, and in 1989, he performed at the Deaf Way Festival in Washington, D.C.. Schneiderman was invited by David Hays, founding director of the National Theater of the Deaf, to join his renowned company, where he appeared in such productions as Treasure Island, Curiouser and Curiouser, and One More Spring, which was shown on Public Television. Schneiderman created and directed Goya, which was presented at Gallaudet University and featured as the grand opening performance for Deaf Way II. In 2003, he played five different roles in DeafWest’s acclaimed production of Big River, the musical version of Huck Finn. This production was seen on Broadway, nominated for a Tony Award, and subsequently toured throughout the United States. 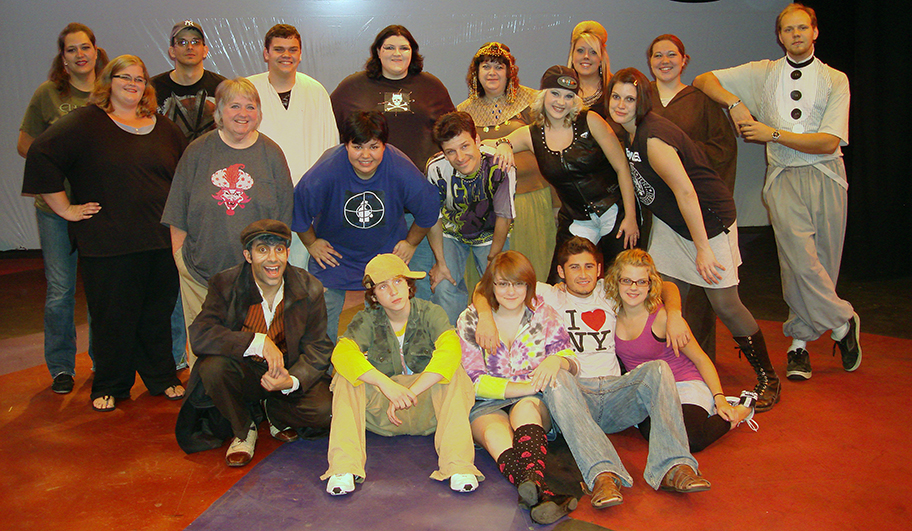 In 2009, three Kent State University at Trumbull professors—Carol Robinson (English), Nancy Resh (American Sign Language) and Daniel-Raymond Nadon (Theatre)—got together and agreed to co-produce Willy Conley’s For Every Man, Woman, and Child–a modern morality play inspired by EVERYMAN. This production was  Kent Trumbull Theatre‘s first ASL/English play, a performance done in two languages simultaneously:  American Sign Language and English.  Dr. Nadon was the Director, Prof. Resh was the Sign Master, and Dr. Robinson was the Dramaturg.  This project was an exciting venture between both campus and community, as well as between hearing and Deaf worlds: accessible to both Deaf and hearing audiences through a mixture of ASL, spoken English, gesture and mime. The play is a contemporary written English adaptation of the medieval (late Middle English) British medieval morality play, Everyman. While Conley’s For Every Man, Woman and Child is inspired by the Christian medieval English morality play, Everyman, it is clearly set in contemporary times, and pays respect to several religions in addition to Christianity, including Hinduism, Islam, Buddhism, and Sun Worship. This is a play that addresses the very foundation of issues in celebrating diverse populations. 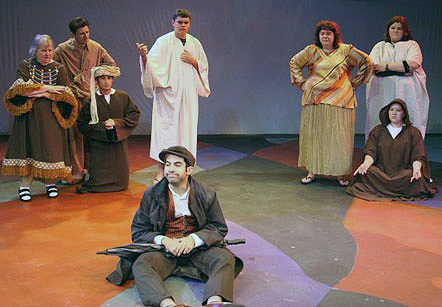 The play calls for a “carnival atmosphere”. We intended to give the performance a “Cirque du Soleil” carnival style (costumes and setting). There also was a festive pre-production atmosphere in the theatre lobby that included popcorn and other concessions, jugglers, clowns, and other circus-type performers wandering around the area. At the Opening Night Performance (September 25), we added a table at which playwright Willy Conley sat, offering to autograph copies of his recently published anthology of plays, Vignettes of the Deaf Character and Other Plays (Gallaudet University Press, 2009).

The performances were held at the Kent Trumbull Theatre (September 25, 26, & 27–at the end of Deaf Awareness Week–and October 3, 4, & 5). On Saturday, September 26, at the end of Deaf Awareness Week, there was a Fundraiser Performance that featured an audience-invited Forum (involving Ohio Deaf Leaders), held after show. Performances ran for two weekends, and then the troop traveled to Loudonville, New York (just north of Albany) to perform at the 24th International Conference on Medievalism at Siena College on October 9, 2009.

The production was a success in the way that it brought diverse populations (deaf, hearing, signing, non-signing) together to overcome challenges of language and cultural differences.  One of the leading cast members of the show, C. Richard Costes (a KSU alumni of the Trumbull Campus) has since moved on to establish himself as an actor in the Chicago metropolitan area, having most recently performed as a deaf Snout in Chicago Shakespeare Theatre‘s Midsummer Night’s Dream.  During the production of For Every Man, Woman and Child, Costes kept a blog (Downplayed & Upstaged) that documented his experiences, as a deaf actor who knows minimal sign language, struggling to be a part of both the signing and speaking communities of the cast and crew.

A professional actor, director, sign master, and playwright, Willy Conley has won awards from VSA arts 2000 Playwrights Discovery Competition at the Kennedy Center, the PEW/TCG National Theatre Artist Residency Fellowship, the Sam Edwards Deaf Playwrights Competition, The American Deaf Drama Festival, the Baltimore Playwrights Festival, the ’97 and ’99 NeWorks Festival in Boston, the Laurent Clerc Cultural Fund, and the Lamia Ink! International One-Page-Play Festival. Published plays include “The Hearing Test” (in No Walls of Stone, Gallaudet University Press), Broken Spokes (Tactile Mind Press), The water falls. (Tactile Mind Press), The Universal Drum (TYA/USA Theatre for Young Audiences Today), and a collection of his plays has just been published: Vignettes of the Deaf Character: And Other Plays (Gallaudet University Press). As an actor, Conley has performed with the National Theatre of the Deaf, Pilobolus Dance Theatre, Amaryllis Theatre Co, Colonial Theatre, Shakespeare-in-the-Park in Rhode Island, Fairmount Theatre of the Deaf, New York Deaf Theatre, Quest: Arts for Everyone, Sunshine Too, and Center Stage. Recently, he appeared in an episode of NBC’s Law & Order: CI ‘Silencer’; other films include: Wrong Game and Stille Liebe (Secret Love). He holds an M.A. in Creative Writing/Playwriting from Boston University (where he studied with Nobel laureate Derek Walcott), and an M.F.A. in Theatre from Towson University. He is an Associate Artist with Center Stage, an Affiliate Artist with Quest, and an Associate member of The Dramatists Guild. In addition, most people do not know that he was the first Deaf person to receive national certification as a Registered Biological Photographer (#319) after having graduated from the Rochester Institute of Technology with a B.S. in Biomedical Photographic Communication.