A variation of Beauty and the Beast, firmly centered in a Deaf world that explores the meanings of “beast” and “beauty” in terms of disabilities and sign language.  Auditions and rehearsals are scheduled as follows: 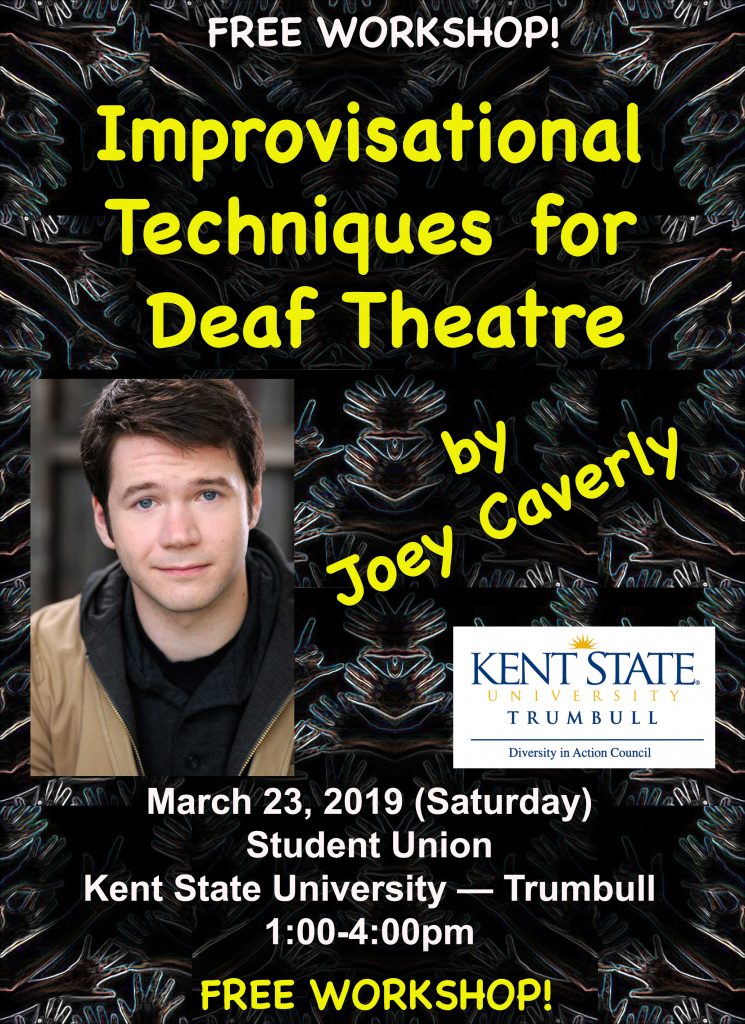 Using techniques applied in Deaf Theatre, participants will undergo a transformative experience that empowers students to explore improv with sign language. These techniques will help participants build trusting relationships, hone listening skills, and adapt effectively to situations. This workshop will be led by Joey Caverly, a veteran to improv, an actor who has worked on Broadway (Children of a Lesser God) and television (Chicago Med), a director of stage theatre — and is the founding member of the Royal 46 Kazoo Band of Walla Walla, Washington.

All participants with varying American Sign Language skills are welcome to participate in this free workshop; no registration required. Student attendance verification tickets will be provided for class credit options.

Beauty and the Beast in a Deaf World
(Tentative Title)

This is not your Disney-version of the story! Originally created by French novelist Gabrielle-Suzanne Barbot de Villeneuve and published in 1740, Beauty and the Beast was later abridged, rewritten, and published by Jeanne-Marie Leprince de Beaumont in 1756. Since then, the tale has been adapted for stage, film, and television. That story was a compilation of fairy tales, fables and folklore. Beauty and the Beast in a Deaf World (and it is likely this title will change) is currently being co-authored by members of Deaf Theatre of Ohio. Set in the era of Alexander Graham Bell (1847-1922), this play is a twist upon the traditional story Beauty and the Beast in that it draws upon the powerful history of deaf education and entertains the historically controversial debate: should we be teaching deaf children to lipread and speak or should we be teaching deaf children to use a sign language? (And teaching both was often not presented as an option.) Alexander Graham Bell, best known as the inventor of the telephone, and whose mother and wife were both deaf, became highly involved in this debate. Belle is a deaf character caught in the middle: is she more beautiful when she communicates in ASL or when she lipreads and speaks?